Dedicated to the idea of uniting India through a single script. 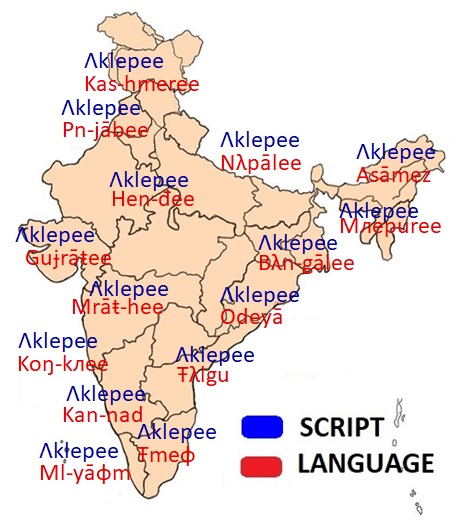 A web site dedicated to the dream of Indian unity while still maintaining its rich diversity of languages.

The Ekalipi script is an idea with worldwide implications.

If all this language content is available in Ekalipi it can be read by an individual who has learnt Ekalipi (though not necessarily understood). It also means that one can write once in Ekalipi and read by everyone who knows Ekalipi.

Among all the countries that stand to benefit from Ekalipi, India will benefit the most. India has 22 official languages each spoken by millions of people (A majority of the languages have many words that are common or at least very similar. The syntax is also very similar). This diversity is wonderful.

What is not so wonderful is there are nn scripts in which these languages are written. As a result it is very difficult for the average Indian to do simple things like read street signs in other parts of the country or communicate with speakers of other Indian languages.

Unfortunately the majority of people assume that a language and its script are inextricably tied together. It is our contention that this is not the case.

Even in India, languages like Kokani, Sindhi and Kashmiri use multiple scripts. Sometimes languages have also changed scripts. Marathi used to be written in “Modi” script. It is now written in “Devanagari” script.

It is our contention that the language problems that all Indians are familiar with, have very little to with the languages themselves. Instead they have a lot more to do with the multiplicity of language tied scripts that are in existence.

Our simple proposition “All Indian languages (and English) be written using our single Ekalipi script“.